In the Nude: Work by Amy Smith 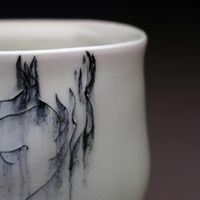 In the Nude Porcelain Detail

In the Nude is a quiet celebration of figure drawing. Figure drawing is the practice of drawing the figure from a live model or "life drawing". Nude models are used in figure drawing to capture the full essence of the human figure. In the Nude captures the figure in line and in form, line is direct and easily understood, if you look closely however, you will see transitions in my pottery forms that reference knees, elbows, knuckles and hips, porcelain clay flows from one joint to another. Surface treatment is kept minimal, bare is acceptable. "I throw porcelain forms that celebrate movement. The forms and surfaces of these vessels are inspired by natural forces, like the wind and waves, and more intimate allusions, like running, dance and the figure. My soft, rhythmic work is intended to be calming and sensual." The Show runs August 2nd - August 31st. Open Monday through Saturday: 10am - 5:30pm Anderson O’Brien Fine Art 3201 Farnam St. #6109 Omaha, NE 68131 (look for the teal awning just west of the Alamo Theater) Free three hour parking is available in the Midtown Crossings garage with validation. Smith earned her BFA from Ohio University in Athens, Ohio and her MFA from the University of Nebraska-Lincoln. She has been a resident artist at The Hambidge Center for the Creative Arts & Sciences (GA), Red Lodge Clay Center (MT), North Dakota State University (ND) and the University of Nebraska-Lincoln (NE). Her work has been featured by CFile.daily (NM), shown at The Clay Studio (PA), Lillstreet Art Center (IL), Arvada Art Center (CO), etc. and has been published in Clay Times and Ceramics Monthly. Smith's teaching career began with an unexpected opportunity: she was asked to fill in for a former professor when he injured his back. Since then, she has taught 27 courses and has grown to love working with students. In 2016 Smith was recognized for her teaching, receiving a Certificate of Recognition for Contributions to Students from The Parents Association and The Teaching Council of University of Nebraska-Lincoln.