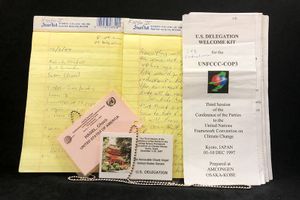 Nametags, notebooks, and a delegation welcome kit from Hagel’s trip to Kyoto, Japan, in December 1997.

The 1997 Kyoto Protocol was a landmark of international cooperation on climate change. It committed industrialized nations to limit greenhouse gas emissions according to individual targets. An extension of work begun with the signing of the United Nations Framework Convention on Climate Change at Rio de Janeiro’s 1992 Earth Summit, the Kyoto Protocol ultimately led to the current Paris Climate Agreement. Senator Chuck Hagel’s involvement in the Kyoto Protocol started upon entering the U.S. Senate in January 1997 and becoming chair of the Foreign Relations subcommittee with jurisdiction over treaties like the Protocol. During his first year in office, he and his staff would learn about international climate negotiations, investigate the details of the Kyoto Protocol, and solidify a position with Republican colleagues on the treaty. Hagel also led the Senate observer group going to Japan that December for the final round of talks. The exhibit starts with the Paris Climate Agreement signed in 2016 and Hagel’s views on climate change agreements today. The exhibit then rewinds to show how Hagel viewed climate change and international cooperation leading up to Kyoto. Through a range of documents from the U.S. Senator Chuck Hagel Archives, visitors will see what strategies he and colleagues settled on for the Protocol and what happened in Kyoto—and after—as the U.S. faced the question of ratification. The exhibit was curated by Hagel Archivist Lori Schwartz with assistance from Hagel Fellow Abigail Cape. The exhibit is open Monday-Friday on the lower level of Criss Library