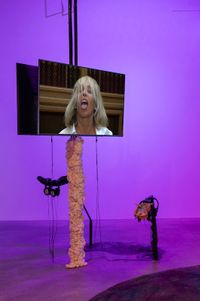 The six-channel installation version of Liv Schulman’s The Gobernment was scheduled to open at Bemis Center for Contemporary Arts on March 19. Bemis is extending the exhibition through September 19, 2020. Until then, an episode is being released each week at vimeo.com/bemiscenter, for one week only, followed by a Virtual ARTalk with Schulman and the exhibition curator, Sylvie Fortin, on May 28. April 16–22: Episode 1 April 23–29: Episode 2 April 30–May 6: Episode 3 May 7–13: Episode 4 May 14–20: Episode 5 May 21–27: Episode 6 May 28: Liv Schulman: The Gobernment Virtual ARTalk Learn more about the exhibition and download the Gallery Guide at bemiscenter.org/gobernment.