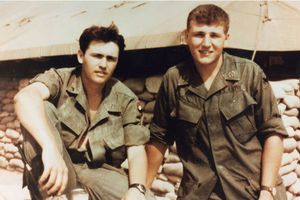 A new exhibit, "In-Country, At Home: Hagel and Vietnam", runs through December 2021, on the first floor of Criss Library. Chuck Hagel arrived in Vietnam in December 1967 on the eve of the deadliest year for U.S. military personnel in Vietnam. Throughout 1968, he and younger brother, Tom, fought in the Mekong Delta and Saigon (today Ho Chi Minh City) as part of the 2nd Battalion, 47th Infantry Regiment. During their time in the same squad--a rarity for brothers in the military--they each saved the other’s life. Hagel left Vietnam in December 1968. Tom followed him home in early 1969. In-Country, At Home: Hagel and Vietnam begins with Hagel’s entrance into the U.S. Army and basic training in April 1967 and follows him as he lands in Vietnam, welcomes his brother to the unit, is promoted to Sergeant, and survives a year in the Mekong Delta. The exhibit concludes with a look at Hagel’s brief tenure as Deputy Administrator of Veterans Affairs at the Veterans Administration and his participation in the groundbreaking for the Vietnam Veterans Memorial in Washington, D.C. Artifacts on display include a replica armored personnel carrier (APC) made for Hagel by his artist brother, Mike, the shovel Hagel used to break ground for the Vietnam Veterans Memorial in 1982, and Hagel’s two Purple Heart certificates. Photographs, letters home, and other documents from Hagel’s Army service, along with his support of the Vietnam Veterans Memorial and tenure at the Veterans Administration, make up the rest of the exhibit.